The Decarbonization of MMWEC’s Portfolio

Massachusetts Municipal Wholesale Electric Company (MMWEC), the Commonwealth’s designated joint action agency for the not-for-profit, consumer-owned utilities of the state, has a long history of guiding municipal light plants (MLPs) in the decarbonization of their energy portfolios.

While MMWEC and its Member MLPs took their first steps in incorporating carbon-free energy with their first foray into hydro, wind and nuclear power in the 1980s, MMWEC did not truly start its plan in earnest until it decided to divest itself of its ownership in an oil plant in Maine and construct its own wind farm.

Phase I of the Berkshire Wind Power Project, a ten-turbine, 15 megawatt (MW) resource located on Brodie Mountain in Hancock and Lanesborough, Mass., came online in 2011.  At the time, it was the largest inland wind farm in the Commonwealth, and today, is the second largest.  The project was expanded in 2019, when two additional, 2.3 MW turbines were added, bringing the project to 19.6 MW.

MMWEC built the Berkshire Wind Power Project in part to replace the lost energy associated with its longtime prior ownership of 22 MW in W.F. Wyman Station Unit 4, located in Yarmouth, Maine.    MMWEC held its ownership interest in Wyman for 43 years before selling it in 2019 – the same year that the second phase of Berkshire Wind came online. Around the same time period, the development of the reliability capacity resource in Peabody known as 2015A began in an effort to replace the capacity associated with Wyman.

Prior to its divestiture of Wyman in 2019, MMWEC and/or its Members contracted for or secured ownership of approximately 50 additional megawatts of wind, 55 MW of solar, 82 MW of hydro and more than 15 MW of battery storage.

MMWEC and the MLPs didn’t stop there. In just the past couple of years, MMWEC has announced plans to invest in numerous additional carbon free resources.  MMWEC is working with several offshore wind developers, and initially plans to contract for approximately 75-105 MW of offshore wind on behalf of its Members.  MMWEC is also planning to install a 100 MW utility-scale battery storage system on its Ludlow campus.  Finally, later this summer, a 7 MW solar project, also on the Ludlow campus, will come online, becoming the largest single solar array in the Commonwealth.

Because of this forward-thinking strategy undertaken by MMWEC and its Members, these resources are fulfilling the MLPs’ capacity supply obligations while bolstering the Commonwealth’s mission to achieve net zero carbon emissions by 2050.  This balanced mix of resources, to meet both energy and capacity needs, is necessary to ensure the MLPs continue to deliver the safe, reliable, low cost service their customers have come to expect. 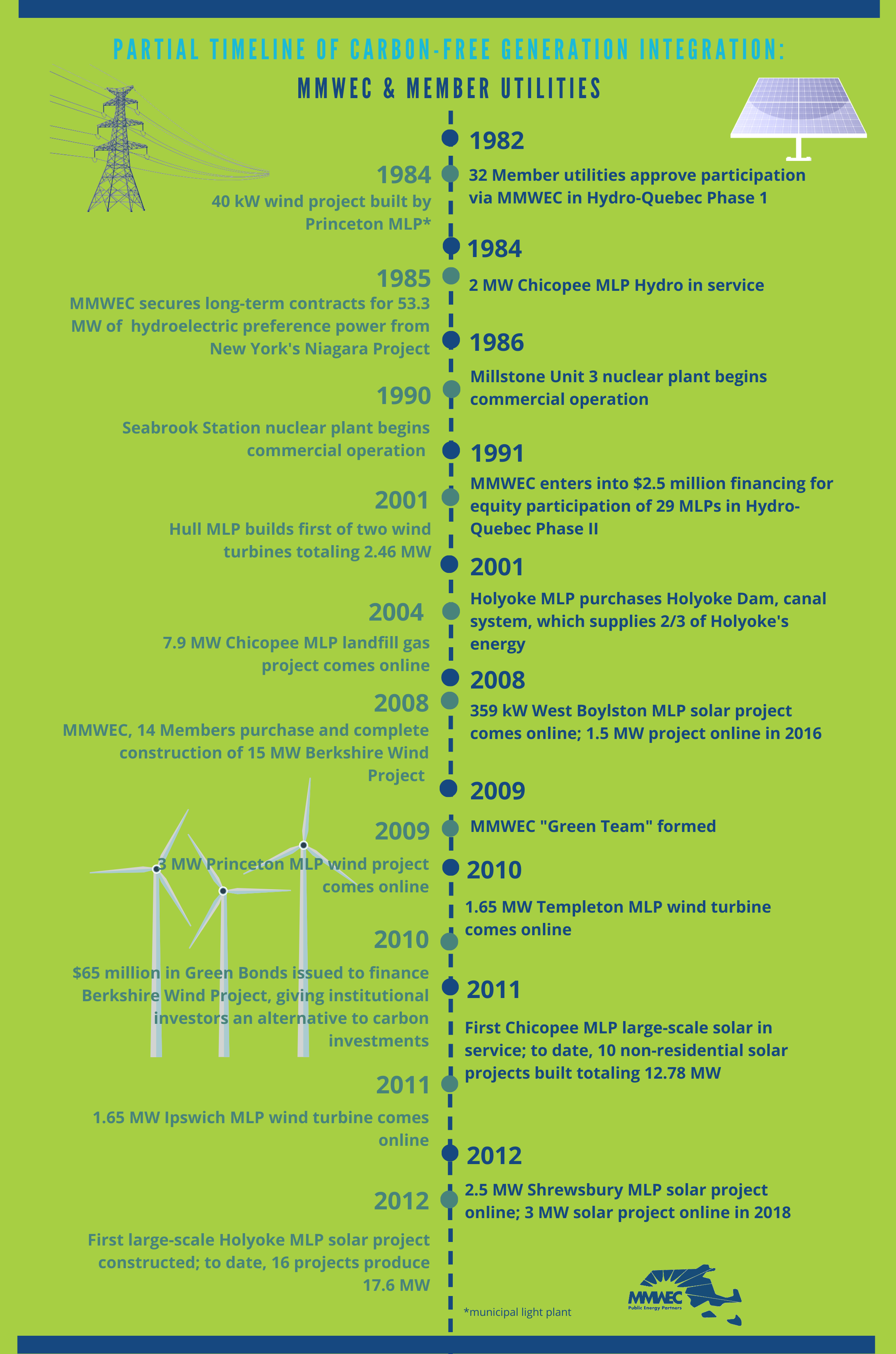 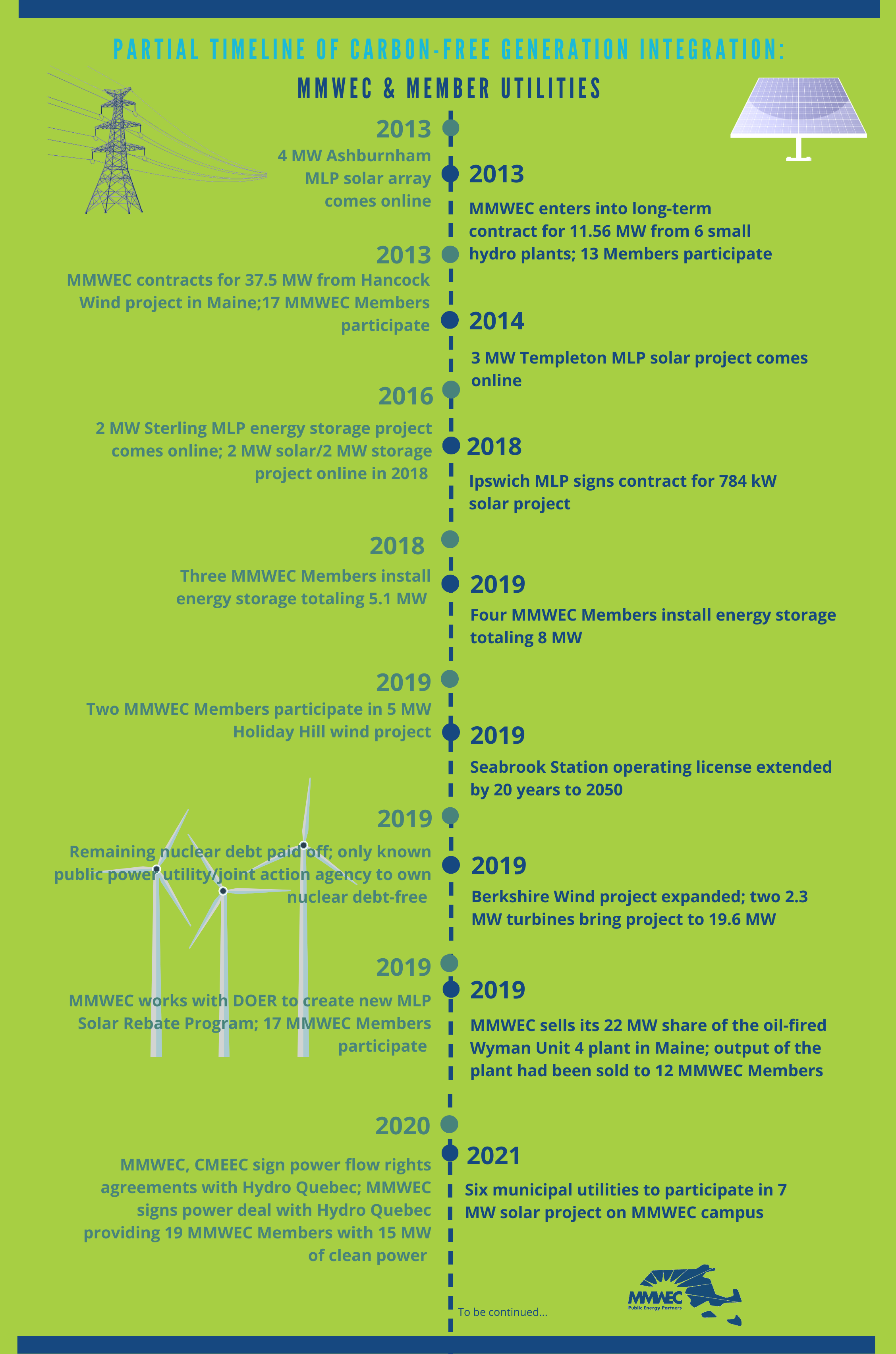